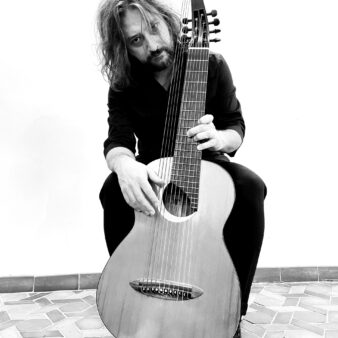 Christian Lavernier was born in Imperia July 27, 1979, and took his first steps in classical guitar studies with M° Mario Senise. He graduated from the Conservatory Giuseppe Verdi in Milan, with the Maestro Paolo Chierici. He attended master classes held by some of the most representative teachers of the international guitar scene including Alirio Diaz, Conrad Ragosnig and David Russell. He deepened the study of the contemporary repertoire, with Angelo Gilardino.

Projects and collaborations:
In 2013 he released his first CD “Christian Lavernier” with the first recording of “Vagando”, the only work for guitar by Luchino Belmonti.
Since 2013 he has taken part in collaborations with artists of various musical genres such as: Tommy Emmanuel, Antonella Ruggero, Sarah Jane Morris, Peter Finger.
2016 saw the release of “Tres Almas” the first three pieces composed for classic guitar and edited by Sinfonica Editions.
Since 2016, he has been on stage together with actor Ugo Dighero, with the melologue “Platero y Yo” on a text by Juan Ramon Jimenez and music by Mario Castelnuovo-Tedesco.
In 2016, master luthier Carlos Gonzalez completed the first and only thiorbate guitar “La Soñada” imagined, built and dedicated to Christian Lavernier and his new musical interpretation.
Since 2018, “La Soñada” has been at the heart of the new Contemporary Future project, which includes works by great Italian and international composers (A. Gilardino, A. Talmelli, F. Chaviano, F. Iannitti…), composed for this instrument and dedicated to Christian Lavernier. Also in 2018, the meeting with M° Nicola Campogrande gave rise to a fruitful collaboration with the publication of the 12 Inkjet Preludes rethought for the “La Soñada” and published by the major Universal Music – Ricordi, with revision and fingering by Christian Lavernier.
For Universal Music – Ricordi, moreover, is published the new work “Redobles y Consonancias” dedicated to Christian Lavernier and “La Soñada” by M° Azio Corghi. Revision and fingering of the work are entrusted to Lavernier himself.
In June 2019, the album “12 Preludi a Getto d’Inchiostro – 12 Ink-Jets Preludes” is released.
In November of the same year, “Contemporary Future” is released by EMA Vinci under the patronage of SIMC and CIDIM. The disc obtained the SIAE label – Classics of Today. The disc’s preface is signed by Ennio Morricone. The introduction to the project and the works is by Azio Corghi and Andrea Talmelli.
March 2021 saw the release of his third album with La Soñada, “Aria” (EMA Vinci), composed by Lavernier himself and with graphics by street artist MrFjodor.
In May of the same year, a new edition of “Habanera Trunca” has been released for “La Soñada”. The piece has been dedicated to Christian Lavernier by Leo Brouwer and published by Espirale Eterna.
In November 2021, the album “Travel” (EMA Vinci) on six-string guitar was released.
Christian Lavernier plays on Josè Ramirez guitars and he is official endorser of Aquila Corde Armoniche.