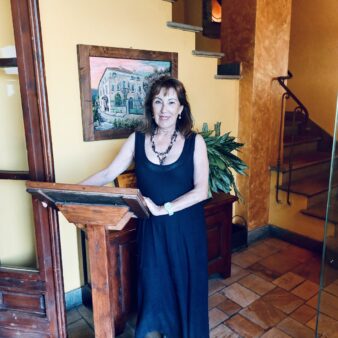 My name is Elvira Arimondo but everyone knows me as “Vivi.” I was born in Imperia on 12/24/1951 and have resided in S.B.M since birth.
I study and graduate in Genoa in literature and literature with a linguistic focus ( Russian and English language and literature). After opening and managing a bar, restaurant and hotel, I moved to Rome to pursue a master’s degree in “hospitality management.”
In the mid-1990s, I moved for about twenty years to live in Tenerife  (Spain) , returning to Italy in 2012, the year my parents became aggravated.
When Mother Rita died, I was asked to take her place as president of the Golden Oak, which she created and directed with so much love for 30 years. I felt that I was not up to it, that it was more deserved by the girls who had stood by Mom’s side for so many years.
Now I am proud to represent a wonderful group in both the work and human aspect.
Vivi Arimondo – President